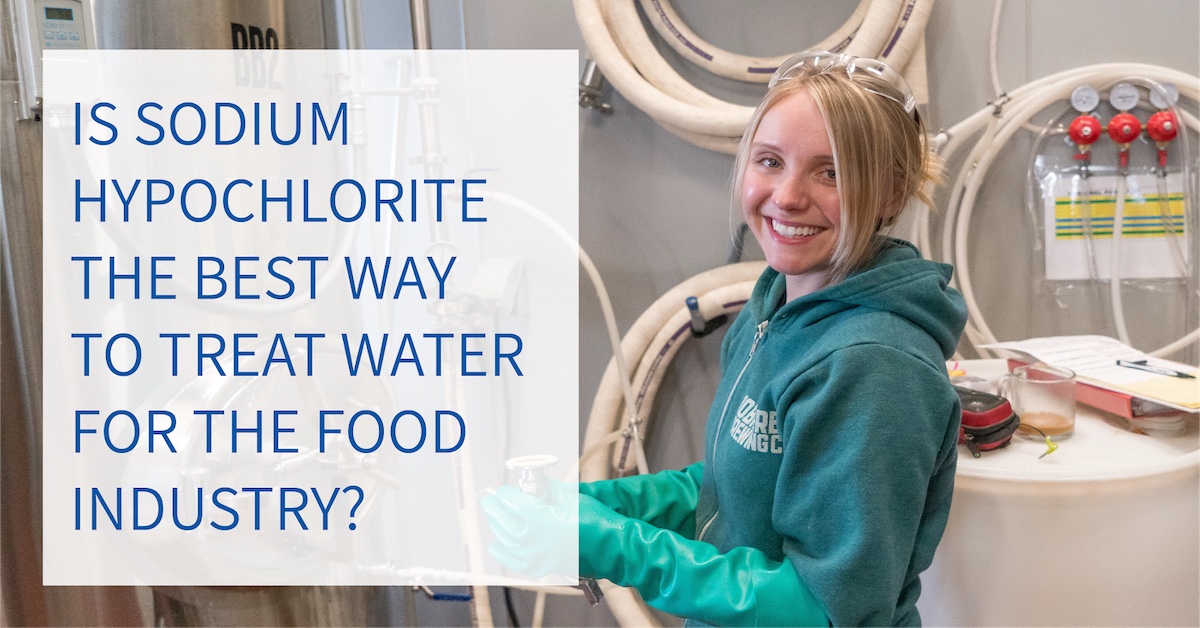 How is Sodium Hypochlorite currently used in the food industry?

Sodium hypochlorite has many applications in agriculture, food and beverage industries. Sodium Hypochlorite maintains water quality through oxidation or disinfection. It destroys harmful microorganisms and prevents algae or shellfish from growing in stored water. It’s an essential component in many sanitisation processes, including washing fruits and vegetables, and the preparation of meat and fish for consumption. As it’s the main ingredient in household bleach, it’s used on factories and farms for cleaning and disinfecting equipment. It’s widely used to disinfect potable water and wastewater in certain countries.  It’s an effective treatment for private water supplies from boreholes, also called wells, and where water is stored prior to use in industry.

How does Sodium Hypochlorite work as a disinfectant?

Sodium hypochlorite functions as a disinfectant in a similar manner to chlorine and is very effective against viruses, bacteria and fungi as it strips away microbial cell walls and renders nucleic acids non-functional, preventing these organisms from reproducing. When added to water, it forms hypochlorous acid (HOCl) and a chlorite ion (OCl-) otherwise known as free chlorine.

The ratio between HOCl and OCl- depends on the pH and the temperature of the water. At 25°C and pH 7.5, the chlorine is divided equally between HOCl and OCl-. It may be necessary to acidify the water as part of the process in order to get the desired proportions – ideally with more hypochlorous acid in the mix as this is the best disinfectant. As the hypochlorite ion is negatively charged, it bounces away from microbial cell walls, which are also negatively charged. The chlorite ion is also bigger than the HOCl molecule so it diffuses more slowly. Hypochlorous acid is usually the best option as it’s a stronger oxidising agent than the hypochlorite ion.

Hypochlorous acid degrades rapidly when it comes into contact with organic matter so it does not have a lasting environmental impact. As with other forms of chlorine, regular testing of the pH and chlorine levels in treated water is necessary to ensure that local quality standards are being met.

What precautions should be taken when storing commercially available Sodium Hypochlorite?

The sodium hypochlorite solution normally available from chemical suppliers is safer and more convenient to store than chlorine gas, but it breaks down if exposed to sunlight, high temperatures, or vibrations. When it’s stored for a long period of time the solution degrades, so good stock management is essential. The higher the original concentration of the solution, the more rapidly it breaks down. It should be stored in a cool room in an opaque (ideally black) container. Sodium hypochlorite is caustic and can irritate, even burn, the eyes and skin on contact, so it needs to be handled by trained staff using protective gear.

The need for controlled storage is one of the main drawbacks of using Sodium Hypochlorite, along with the health and safety protocols involved. It can be difficult and expensive to store large amounts over time. In order to maintain standards, an agricultural production company might need to keep large quantities of other chemicals like chlorine dioxide and peracetic acid on site for washer disinfection. This means placing regular orders with a chemical supplier, costing upwards of £100K per annum.

Is there an alternative to bulk storing Sodium Hypochlorite?

At Prodose, we have developed a unique electrochlorination system that uses common salt, water and electricity to dispense a low pH Sodium Hypochlorite into your water supply as and when required. No hazardous chemicals are needed for this reaction, so storage isn’t a problem. It’s a much safer process than chlorination using commercial sodium hypochlorite as the solution remains below the 5% concentration threshold considered hazardous by the UK Health and Safety Executive.

Our electrochlorination systems are geared to the size of your operation and range in dosing levels from 100 grams per hour up to 10 kilograms per hour. This simplifies the production process with increased automation, saves on running costs (chemicals cost around £10K per annum), and improves efficiency. We’ve installed these electrochlorination systems in a wide range of facilities, including cleaning in place (CIP) for a leading soft drinks company.

To learn more about the latest water treatment techniques, including alternatives to Sodium Hypochlorite, please contact the team of expert chemical engineers at Prodose. We specialise in developing unique solutions to your water treatment problems, and electrochlorination may well be the technology you’re looking for.

END_OF_DOCUMENT_TOKEN_TO_BE_REPLACED

If you are interested in upgrading your system in this way, please get in touch with us at Prodose. We’d be very happy to talk to you confidentially and on a no-pressure basis.